The rap game in Ghana is on the rise following the beef between Strongman and Medikal.

Ghanaian actress Yvonne Nelson who has been following the beef and is actually enjoying it took to Twitter to pass her opinion on the saga.

In her tweet after Strongman released ‘Immortal’, his second diss song directed at Medikal, Miss Nelson commended him for his rap prowess on the tune.

According to the moviemaker, the beef happening now is very good for the music Industry and both artistes. She indirectly described Strongman as an amazing chef after enjoying the immortal diss tune directed at the AMG signed act.

Strongman and Medikal have been at each other’s neck for the past two days releasing diss songs to prove their rap prowess.

Medikal in his first diss song titled ‘To whom it may concern’ did not mention names but Strongman who believes he has the strength to reply did so with ‘Don’t Try’.

Medial after listening to ‘Don’t try’ which was a direct diss to him came hard with ‘The Last burial’ to also attack the former Sarkcess Music and Mic Burner artiste. 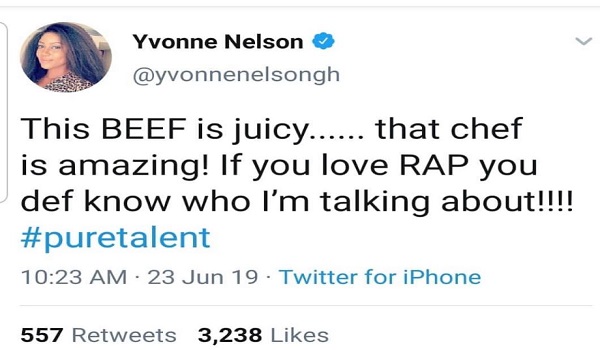 MrrrDaisy Features Jessy Gh On His Single Dubbed “The One”

Court remands Shatta Wale, three others for a week over gunshot attack prank

I Had An Encounter With The Lord Four Times : MAGNUS

Avonsige To Premier First Ever Fashion Flim In Ghana