Ronaldo, goalless in his first three games since his move from Real Madrid, tapped in shortly after half-time.

The 33-year-old then finished off a rapid counter-attack by shooting into the bottom corner after 65 minutes.

Sassuolo pulled one back in added time via Khouma Babacar and Douglas Costa was sent off but the hosts held on.

Juve’s Brazilian winger was dismissed after a video assistant referee intervention for spitting at Federico di Francesco, having aimed a headbutt at the same player and appeared to try to elbow him.

Ronaldo could have completed a hat-trick late on but missed two easy chances from inside the penalty area.

The win is Juventus’ fourth from four games this season.

The wait ends for Ronaldo 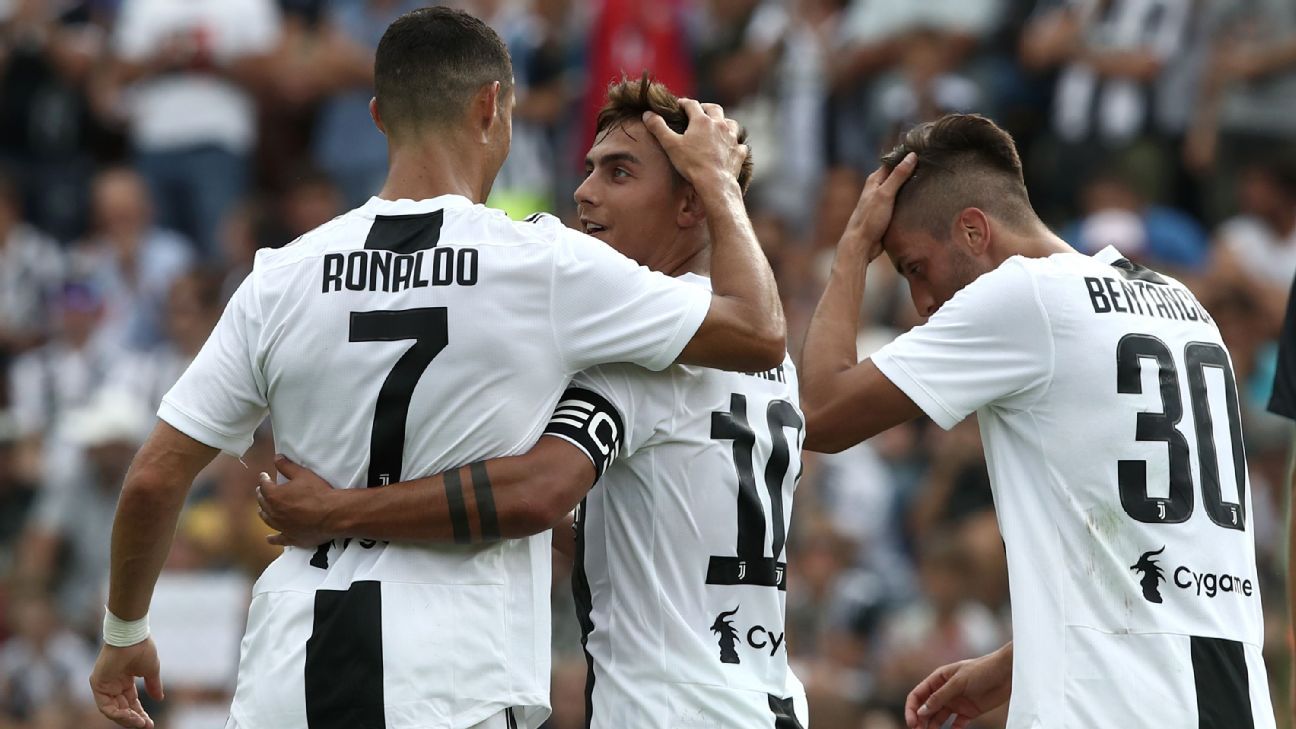 Ronaldo had been on the pitch for 320 minutes in Serie A this season before scoring his first goal since his remarkable summer move.

The wait ended with his 28th attempt of the league season but he had looked increasingly frustrated in the first half at his failure to find the net.

Ronaldo’s first effort of the match in the sixth minute was blocked. He then failed to direct a header on goal and in the 27th minute struck an ambitious free-kick wide from 35 yards.

But his first goal in Juve colours could hardly have been simpler after Sassuolo failed to deal with a corner. Gianmarco Ferrari headed the ball on to his own post and it rebounded to Ronaldo unmarked inside the six-yard box for the forward to tap home.

His second was more typical of the forward as he showed excellent pace to keep up his side’s counter-attack and coolly finished low past the goalkeeper.

The crowd celebrated Ronaldo’s first goals for the club wildly while the forward’s girlfriend and son were also in the stands to witness the moment.

The game ended remarkably with substitute Costa twice to the fore, before and after Sassuolo’s goal.

First the Brazilian made a dangerous lunging tackle on Di Francesco in the build-up to the goal.

As Di Francesco got to his feet Costa appeared to throw an elbow into the face of the Italian and then aimed a headbutt at the player in front of the referee.

Costa was initially shown a yellow card but, when moments later replays showed him spitting into the face of Di Francesco, he was dismissed via VAR.

Shatta Wale Tells Ghanaians To Be Patient With Nana Addo

Ronaldo arrives for Juventus medical ahead of sensational €100m transfer

Quality of our music is declining – Appietus

VGMA 22: We don’t need to vote, give it to Amerado – Dan Lartey predicts Best Rapper of the Year...