The Rev. Billy Graham, counselor to presidents and the most widely heard Christian evangelist in history, has died at age 99. 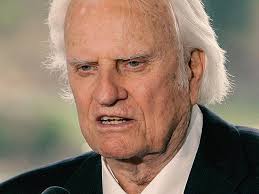 He had been treated in recent years for cancer, pneumonia and other ailments. His wife, Ruth, died in 2007. Graham reached more than 200 million through his appearances and millions more through his pioneering use of television and radio.

Unlike many traditional evangelists, he abandoned narrow fundamentalism to engage broader society. His message and service to U.S. presidents from Dwight Eisenhower to George W. Bush earned him the nickname “America’s Pastor.” In 1995 his Evangelistic Association designated his son William Franklin Graham III as the ministry’s leader

Will Smith Calls Black Panther ‘Spectacular,’ Says it Nearly Brought Him to Tears

You want privileges to pull a weapon, no! – COP Kofi Boakye chides celebrities

Coronavirus: Why lockdowns may not be the answer in Africa