Film maker, Shirley Frimpong-Manso has described as “sad” the end of marriage between her brother-in-law, Chris Attoh and his now ex-wife, Nigerian actress, Damilola Adegbite.

Frimpong-Manso was speaking on Starr FM Wednesday evening. She told Host, Bola Ray, the divorce was difficult for the people around them.

“It was sad. Chris is an amazing guy and I have consistently said that I wish that he will find love again; Chris is so romantic. There was a lot of talking going on. I like Dami a lot, she is a very nice person. I worked with her in one of my movies and she is also my friend so it was really sad to see them go their separate ways. It was a difficult moment for everyone involved.”expressed Frimpong-Manso.

Attoh initially denied reports about the end of his marriage to Adegbite, but confirmed it later during an interview with BellaNaija in September 2017.

“However, since the divorce, we are obviously now reworking things to create a new balance between work, spending time with and raising our son. Dami is a wonderful woman and an amazing mother. Despite our differences, she and I will always be friends. So, more than anything we will find ways to continue to make sure that Brian can still have a balanced upbringing filled with love and support. Both our families have been and are still very supportive in helping us take care of our son Brian when we can’t be there due to work.”

He also spoke about his family helping to take care of their child when he and Dami had to work.

“I believe throughout our marriage, it was probably one of the most challenging things we ever did. However, the key word is balance. At times when we both had to work, our parents would be there to hold the fort. God bless family because they were and still are very supportive.”

They also played lead roles in the movie Six Hours to Christmas. a production by Shirley Frimpong-Manso’s Sparrow Production.

The couple married in a private event witnessed by family, close friends and associates on February 14, 2014. They are parents to son, Brian.

In the cover story for the June 2015 edition of Glitz Magazine, he told the publication, he is not worried about the exes of his wife because ”at the end of the day I ended up with the prize. Dami is my queen.” 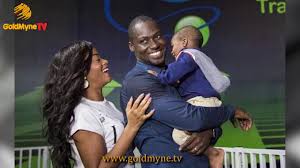 Sex And Nudity Are Now Part Of Society – Kojo Antwi

Sarkodie set to release documentary about his life, music career and the road to his success